The Reign of Corruption 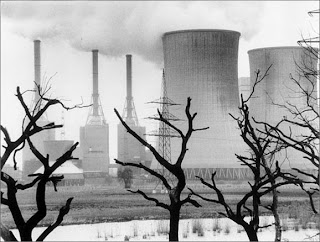 WAS anyone really surprised when the Conservative Party declared what The Daily Telegraph referred to as a "war on the countryside" in which property developers will be given pretty much free rein and effectively be subsidised by the state?

Did anyone really believe that this political party is steered by a set of values, amongst which is the protection of the environment? Did anyone believe, for that matter, that when the Labour Party came to power six years before the invasion of Iraq it was really committed to pursuing an “ethical foreign policy”?

Anyone who has paying the slightest bit of attention can see that the “principles” which these parties flaunt when they are fighting election campaigns are nothing but empty lies.

And yet the media, and therefore a certain part of the population, continue to treat their representatives as they are genuinely involved in some great battle of ideas, as if they are truly motivated by the slick reasons and excuses they present to the public.

The BBC for instance, will often say that the government “believes” such and such to be the correct solution, or that the prime minister “believes” he was right to act in a certain way.

What they are really reporting is that the government or prime minister says they believe something, but by missing out that all-important division between the politician’s statement and the BBC’s reporting of it, they are endorsing that statement and telling us that our authority figures can always be assumed to be telling the truth. The trust that the public (for some reason!) has in the BBC is therefore projected, subtly, on to the government or minister.

In fact, politicians are rarely truthful about their actual beliefs, if indeed they have any. Naked greed, self-interest and power-lust, bolstered by bribery, flattery and blackmail, are their only values and principles. We are living under a reign of corruption, where the most venal and ruthless hold all the wealth and the power that it commands.

We do not live in a democracy. We live in a plutocracy which disguises itself as a democracy in order to keep the population pacified.

The disease which we term capitalism has only one aim, and that is to continue to grow and spread. It is not based on principles or values or judgements, and neither are the politicians, journalists and cops who serve it. 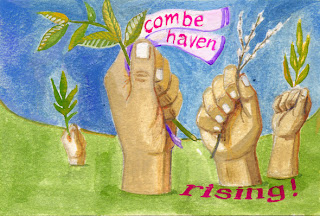 Combe Haven Rising: A Week of Activities, Exhibitions, Valley Walks and Workshops Against the Link Road!
Spring is coming, birds are nesting, the sap is rising and so rises the NO LINK ROAD CAMPAIGN.  Combe Haven Rising is a week of events co-hosted by The Combe Haven Defenders, Artists and Combe Valley, Crowhurst Villagers and Hastings Arts Forum.
Here’s what’s in store: