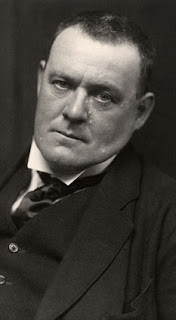 This lament to the destruction of our county was written by that great lover of the Sussex countryside, Hilaire Belloc, back in 1936. But it very much reflects what many of us feel today.

Can Sussex endure? No man knows the answer to that question, but in measuring the chances we of the county must admit that they are heavily against our survival. It would seem that the forces making for the destruction of this county, its traditions, its personality, are too powerful to be withstood.

Moreover, they are working at such speed that our own generation may well see the end of the land we knew.

It is, in a sense, the coming of a new mode of transport which thus threatens us. The internal combustion engine, which has revolutionised the world, strikes with peculiar force at the ancient spirit of this county, on account of its situation between London and the sea.

The internal combustion engine has done many other things upon a larger scale. It has destroyed the military security of England, it has made wholesale death and mutilation upon the roads familiar to the modern mind; it has killed quiet and with quiet all dignity: there is peace nowhere.

Side by side with all this mechanical change has gone a spiritual change which destroys our powers of resistance.

Men have lost their doctrines, and therefore their manners and morals, and the passing of all the ideas that made our civilisation is due more to this loss of standards than to any material causes.

In the midst of so much evil the passing of Sussex would seem a small thing, but to us it is a great one.

Which of us could have thought, when we wandered, years ago, in the full peace of the summer Weald, or through the sublime void of the high Downs, that the things upon which we had been nourished since first we could take joy in the world would be thus rapidly destroyed in our own time, dying even before we ourselves should die?

Yet apparently it has come. In the old days when the huge amorphous mass of London, more numerous than many a state, was only linked with the sea-coast by the railway, we feared for the future, but did not despair of it.

The coast might become a line of alien building, and here and there upon the main arteries across the Weald some suburban thing having no fellowship with the county at all would grow up round a station; but Sussex as a whole remained untainted by the intrusion.

The contrast between the meaningless new watering places, the suburban blotches and the ancient plough land, woodland, downland, was only the stronger.

Then came the change: London broke out like a bursting reservoir, flooding all the ways to the sea, swamping our history and our past, so that already we are hardly ourselves.

Of a week-end the roads from north to south are like a city street. The new engines climb the Downs; they invade every corner. You may hear the machine-gun fire of a motor bicycle on the greensward of Chanctonbury Ring. There is no retreat wherein you can escape the blind inhuman mechanic clatter. How could any organism survive this ubiquitous thrusting into its substance of alien things?

There is much more than this mechanical cause at work. There is the pressing down of individuality by modern monopoly in every shape: uniformity which is the death of character.


The schools and wireless between them should kill all local speech. All our press is now a town press, and in every activity the slow rhythm which is native to mankind has been shattered. It cannot be recovered.

More than any other district of England, this belt between London and the sea must be harried and broken up by the new machines. Worse than this, the sky itself must be troubled with a perpetual noise, for Sussex faces the peril from air in war as traffic through the air in peace.

How long will it be before there shall be no man left alive who can remember the old affair? It was ancient and rooted beyond all others in England, it was a kingdom under its own king when Claudius came, it remained one separate unit through the centuries of the Dark Ages, the latest to receive religion from overseas, the latest to receive any change at all.

We boasted that it would resist for ever. We cannot so boast to-day. Rather are we on the point of surrender and of admitting that the effort of resistance must now be abandoned.

There is only one consideraation which may lighten somewhat the burden of what seems inevitable. It is this: that, just as we could not foresee the sudden tidal wave which has swept over us, so the future, even the immediate future, may check the ruin of our home, of our most ancient life.

Some incalculable further change may stop the further process of disintegration. It is not conceivable - but often enough the inconceivable happens. Disaster and decline might destroy machines and so save, before they had disappeared, the last stocks and found some new repose wherein they might strike root again.

But as things now stand there would seem to be no prospect of survival through the coming years; nor will there be any Sussex any more: Ubi Troja fuit.
Posted by Paul Cudenec at 05:20