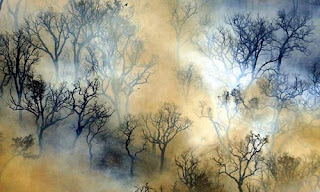 SOMETIMES an apparent coincidence is in fact telling us something rather important.

No sooner had we heard the shocking news of plans for a 11,500-home new town in the heart of our Sussex countryside, at Sayers Common, than a major report came out warning us that we just can't go on like this.

Here is part of an article from The Guardian:

Celebrated scientists and development thinkers today warn that civilisation is faced with a perfect storm of ecological and social problems driven by overpopulation, overconsumption and environmentally malign technologies.


In the face of an "absolutely unprecedented emergency", say the 18 past winners of the Blue Planet prize – the unofficial Nobel for the environment – society has "no choice but to take dramatic action to avert a collapse of civilisation. Either we will change our ways and build an entirely new kind of global society, or they will be changed for us".

Apart from dire warnings about biodiversity loss and climate change, the group challenges governments to think differently about economic 'progress'.

"The rapidly deteriorating biophysical situation is more than bad enough, but it is barely recognised by a global society infected by the irrational belief that physical economies can grow forever and disregarding the facts that the rich in developed and developing countries get richer and the poor are left behind.

"The perpetual growth myth ... promotes the impossible idea that indiscriminate economic growth is the cure for all the world's problems, while it is actually the disease that is at the root cause of our unsustainable global practices", they say.

Meanwhile, here in Sussex more and more voices are being raised against the insanity of endless 'development' destroying our natural heritage.

Below is a section from one recent comment piece in a local paper.

We are supposed to sit back and simply watch as meadows, trees, footpaths and breathing space are stolen away from us by the men from the City.

I for one find it impossible to sign up to the consensus that allows this to happen.

Where will it all end? The logic of this mindset is that more and more land must be destroyed (the polite term is ‘developed’) on a permanently ongoing basis.

Logically, the brakes can never go on, otherwise the ‘economy’ suffers. Logically, every last blade of grass will have to be ripped up to feed this cancerous expansion.

Logically, all life on the planet will be sacrificed to the gods of profit and ‘progress’.
Posted by Paul Cudenec at 01:51