A strange thing happened after we posted our last article about a campaign in Brighton to save a designated nature reserve on Whitehawk Hill from housing development.

All of a sudden, an apparent counter-campaign was announced, declaring that "Whitehawk says yes" to the destruction of the precious green space and its wildlife.

We say "apparent" counter-campaign because, unlike our friends around Whitehawk who are opposing the scheme, it is not at all clear that it has any real community basis. Less grassroots and more astroturf, it would seem.

The "yes" campaign has been announced by a "group" calling itself Brighton YIMBY (Yes In My Backyard – a grammatically inept attempt to come up with the opposite of Not in My Backyard. Or "No in My Backyard" as they presumably call it).

They have a Facebook group with no fewer than 17 members and on Twitter they have a mighty army of 107 followers.

Sadly for their credibility, very few of these seem to have anything to do with Brighton. Admittedly, @BrightonNimby are followed by a local renters' union (@ACORN_Brighton). But the support of @kooksbrighton, Kooks restaurant, and  ‏@gastrobrighton, a writer specialising in "Brighton's gastro scene", seem somehow less relevant to the cause...

We could find just three other followers who say they are from Brighton.

The first of these is Jonny Anstead (@JonnyAnstead). He declares: "I build homes with TOWN (@wetweettown) and live in Brighton". TOWN is a London-based development company, which is itself also one of the select band of @BrightonNimby's Twitter followers.

The second is Brighton resident Nick Jacob (@nickNJjacob) who works for GlobalCapital magazine.

The third is Rico Wojtulewicz (@Rico4Hove). Conservative candidate for Central Hove, Wojtulewicz also happens to be the senior policy advisor for the House Builders Association (HBA), the housebuilding division of the National Federation of Builders.

The business connection to @BrightonNimby is strong. They are followed by a swathe of professional urbanists and organisations interested in "regeneration and development".

Apart from property firm TOWN, there is also King & Co (@KingandCompany) "a residential property developer based in Hatfield, Hertfordshire".

Another follower is Meaning Conference (@MeaningConf ) "the annual gathering for people who believe business can and must be a force for positive change in our dynamic and volatile world" which is taking place in Brighton on November 15, 2018.

Most of all, @BrightonNimby is followed by other "Yimby" twitter accounts from the UK and elsewhere.

Well, by "elsewhere" we mean the USA, where there seems to be a surprising level of support for @BrightonYimby and their heroic struggle to concrete over the Whitehawk Hill nature reserve.

Among the many American followers are Santa Cruz YIMBY (@SantaCruzYIMBY) which brazenly admits it is "advocating for the construction of all types of housing development in Santa Cruz County".

There is also one Jesse Kanson-Benanav (@jessekb) who terms himself "YIMBY warrior for more housing" and is "affordable housing developer" at @BBHousing. This turns out to be "B'nai B'rith Housing", which builds "non-sectarian housing, both affordable and mixed income", in Greater Boston, USA.

More eccentrically, there is Phil Ryan (@therealphilryan) who terms himself a "Radical centrist. Globalist shill".

But the real affiliation of the YIMBY movement is not actually political in the usual sense of the word.

Take, for example, East of England YIMBY (@EofEYimby ) and their statement that they are "bringing developers and communities together".

Hackney YIMBY (@HackneyYIMBY) are even more explicit when they come out as "Pro-development, Pro-growth".

This is the crunch line, straight from the mouth of one of the UK "YIMBY" groups. Pro-growth means pro-profit, pro-money-making.

When we consider the large number of property developers associated with the YIMBY cause, we are left with the suspicion that all their talk about helping young people afford housing is nothing but spin, masking the age-old desire to make a quick buck.

Making money isn't a political belief or principle. It is a total lack of principle. It is just self-interest of the lowest kind, made even lower by the pretence that it is something else, an altruistic concern for the well-being of other people.

In the USA, the YIMBY "movement" is already being exposed. Truthout magazine, for instance, reported: 'The YIMBYs’ “build, build, build' platform only stands to benefit a fortunate few".

It highlights the role of "pro-development activist" Sonja Trauss, who this week lost an election battle in San Francisco after more than a year of pushing "aggressive pro-development policies" in City Hall.

Says Truthout: "Entrenched online in the libertarian strongholds of Reddit and TechCrunch, and in the real world through real estate- and tech-sponsored nonprofits like SPUR and YIMBY Action, Trauss’s followers live by the neoliberal belief that deregulation and building more housing, even if it’s only affordable to the richest of the rich, will trickle down and eventually make housing affordable for all."

And it reveals that North America’s first YIMBY convening, YIMBY2016, was funded by property development groups, such as the National Association of Realtors and the Boulder Area Realtor Association.

In fact the article's headline itself tells us all we need to know, and what the people of Whitehawk and Brighton need to understand about the "campaign" being launched to deprive them of their green space: "YIMBYs: The Darlings of the Real Estate Industry". 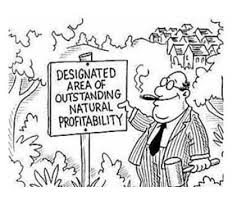